Liam Ronayne, Cork City Librarian — as those who know him are aware — is a huge music fan and is always happy to spend a coffee break chatting about the latest goings-on in the music world or about revered legends of the past. It isn’t often, however, that Liam would have the time to put pen to paper on the subject, but considering that this is Rory Gallagher & Taste and that Liam himself is a fan, he’s gone that extra mile:

On disk 3, the five numbers culled from a 1970 BBC Radio 1 live set are introduced by John Peel, so laid-back he’s virtually horizontal. Peel remarks that, “Taste are one of those bands . . . who need to be seen and heard live to be fully appreciated”. That’s a view that most would agree with, borne out here by pillars of Taste’s live set, like ‘Catfish’, ‘Gamblin Blues’ and ‘Sugar Mama’, and by the version of ‘What’s Going On’ captured live in Stockholm not long before the band split up, which breathes so much more into the song than the studio version. Gallagher’s legendary energy, fantastic technique, and joy in the music are all to be found in the many live cuts over the four disks, and especially on the Stockholm set.

But it would be very wrong to overlook the beautifully crafted songs that make up ‘On the Boards’, Taste’s second studio album. This is a very special artefact in itself, and much more than a keepsake of the live sets. In the title track, the band, all three of them, stretch out to great effect: the dynamic, the groove, the bluesy sound all remind us what was lost when they did split up. 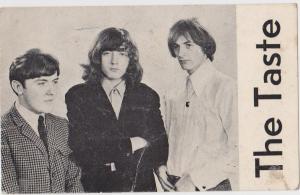 Another unmissable aspect of the Box Set for Rory fans from this part of the world is having a full 56 minutes of the original line-up from 1968, with Eric Kitteringham on bass and Norman ‘Sticks’ D’Amery on drums. Seven numbers were recorded in the Maritime Hotel, Belfast (Van Morrison & Them’s old stomping ground) as a demo to interest record labels; there are versions of ‘Blister on the Moon’ and ‘Born on the Wrong Side of Time’, recorded as singles for the Major Minor label (run by Belfast promoter Phil Solomon), songs that were re-recorded with Wilson and McCracken for Taste’s debut album on Polydor the following year. The four tracks recorded at the Woburn Abbey Festival in England in the summer of 1968 showcase a lively, powerful band, with a great sense of fun.