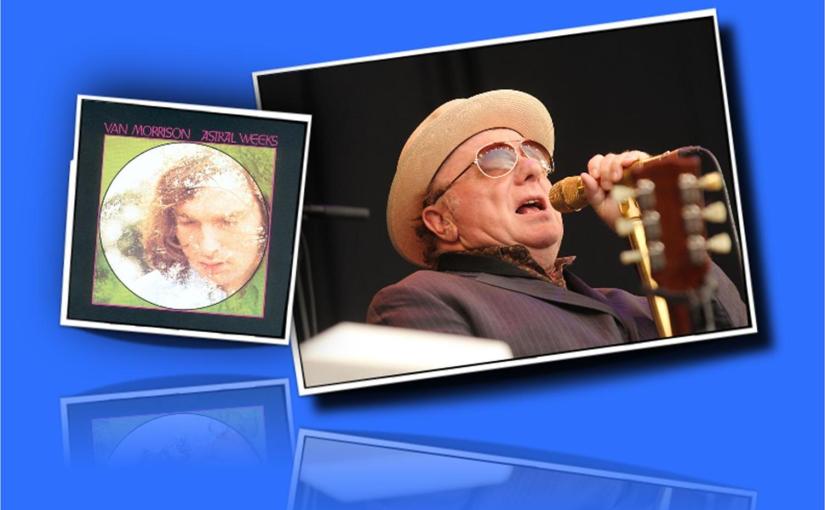 Astral Weeks was acknowledged as one of the best reissues of 2015 in many end-of-year lists.  This reissue is, nevertheless, a peculiar thing.  The sound is definitely better – warmer, richer – than the first time it was issued on CD, and one can appreciate  Richard Davis’s bass-playing even more.  Plus, there are four additional tracks.

But it could have been so much more, with little effort and just a bit of imagination from the record company.

Unlike the Moondance ‘expanded edition’ of 2013, which gave us a second CD of earlier takes and alternative versions and thus adding to our enjoyment of the record, there is nothing like that here.  In fact the strongest reaction is that of an opportunity missed.

When Morrison played the entire set of Astral Weeks live in November 2008 (40 years after its original release) he made it clear that he had wanted the order of the songs to be different to how they were on the original.  He had wanted the album to reflect the thematic and emotional development of the songs, culminating in ‘Madame Joy’.

Lewis Merenstein was the man chosen by Warner Brothers to produce the album.  Merenstein brought his own vision to it, and saw that the songs needed jazz musicians rather than R’n’B sessionmen.  There is no reason to believe that Merenstein wanted to sabotage Morrison’s vision; it was just that the time limits imposed by vinyl meant that he had to change Morrison’s order.  Morrison’s preference would have meant the first side was 19 mins 40 sec but the second 26 mins 25 sec. 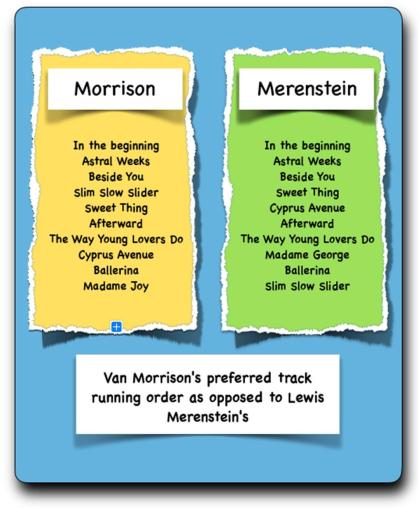 There has been some (not much, to be honest) controversy about whether there was extra music in the Warner Brothers vaults from the Astral Weeks sessions of Sept–Oct 1968.  Morrison alluded to there being two songs but, in his usual elliptical way, Merenstein was always clear that there was nothing.

The two previously unheard takes included on the reissue – ‘Beside You’ and ‘Madame George’ – do not add much.  The rough versions of these two, recorded when Morrison was under contract to Bert Berns, are more interesting, as we can hear how much the songs developed over 12 months.  These versions were included in a ragbag compilation called This is where I came in, released in 1977 by Bang, which collected the eight tracks issued on Blowin’ your mind with the less awful tracks Morrison had to cut to satisfy his contract obligations with Berns.

The long version of ‘Ballerina’ is welcome, but the ‘full’ version of ‘Slim Slow Slider’ is a bit of a mystery.  Apparently those who played on the session remembered that the song developed into a long jazz improvisation, but we only get a hint of that here.

When this classic song was first recorded it was known as ‘Madame Joy’, and it was under this title that Morrison played it at the Hollywood Bowl in November 2008.  Maybe you’d need to be an expert on the East Belfast accent to be absolutely sure, but to these ears it sounds like he’s singing ‘Joy’ more often than ‘George’.

Simple:  A two-disc reissue, with the ‘original’ Merenstein album as Disc 1, and with Disc 2 using Morrison’s preferred order, the original title ‘Madame Joy’, and the (slightly) longer takes of ‘Ballerina’ and ‘Slim Slow Slider’.

Then let the public decide which is better.