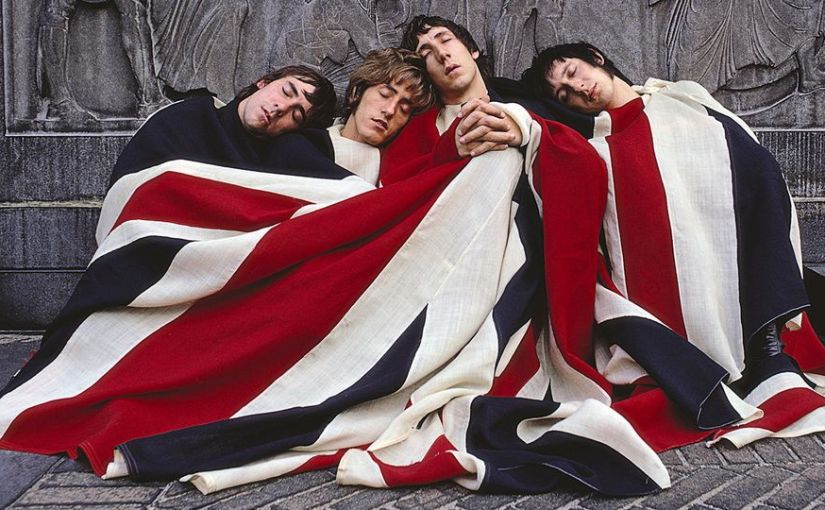 Uncut magazine has called it “a year with a hex on it, a year gone rogue”.

As 2016 draws to a close there is no escaping the portents of mortality, especially for those of us who grew up in the late 1960s and early 1970s:

Fidel of course, although he may not have graced as many bedroom walls in those days as his compañero Che; the irreplaceable Muhammad Ali;

Carlos Alberto, captain of Brasil 1970, the greatest ever football team, and Johann Cruijff, one of the four or five greatest players ever;

The music world has been the big loser:  BB King, Ben E. King, Ornette Coleman, Allen Toussaint, Bowie, Leonard Cohen, Mose Allison, Merle Haggard, and far too many others.  Not all of them were really old either: Prince, Glen Frey (of The Eagles), Chris Squires (of Yes) for example.  Closer to home the artist called Black, AKA Colin Vearncombe, died from injuries he had suffered in a car crash near Cork Airport.

Back in the mid ‘60s, The Who famously sang

“Hope I die before I get old”.

50 years on they still play that song, with two of the original line-up.

You know in the old days, the young man had all the money”.

Times have changed, that’s for sure.  Sad and all as these deaths are, the longevity of those music icons who died in 2016 – and those still making music – makes one wonder whatever happened to the notion that rock’n’roll is a young man’s game.  Most of those who died this year lived a half century longer than say Jim Morrison, Jimi Hendrix, Janis Joplin, and yet their loss is being deeply felt.

Leonard Cohen’s You want it darker came out to rave reviews in the autumn.  For example

‘this exquisite 14th album from the Montreal poet’  (The Observer)

‘this wonderful new album . . . wise and honest and full of life’  (Alexis Petradis in The Guardian).

When he sang ‘I’m leaving the table / I’m outta the game’ most critics either misread what he was saying or preferred not to grasp it.

Mind you, reading between the lines there was an element of ‘imagine he’s still alive and still bringing out records, at 82!!!’

‘eighty-two years old and still at the top of his game while mining the depths’ (Mojo again).

Not for the first time he knew more than the music critics.  We now know that his album was a farewell; it was a struggle for him to record the songs as he was dying of cancer.

Some of the old masters are thankfully still around.

Van Morrison, still hale and hearty at 71, has received a lot less press for his Keep me singing, released at the same time, although this is a fine piece of music-making.  It features some gorgeous melodies ― ‘Memory lane’, ‘Every time I see a river’, and ‘In Tiburon’ ― and a blues ― ‘Going down to Bangor’ ― that links County Down with the south side of Chicago.  There is great singing by Van, and beautiful playing by Fiachra Trench on keys and Paul Moran on Hammond, and Van himself on blues harp on a couple of numbers.

And of course, to cap it all, Bob Dylan (75 last May) was awarded the Nobel Prize for Literature.  Dylan is the first artist since George Bernard Shaw to win both an Oscar and the Nobel Prize.  If anyone from the popular music world was to win a Nobel it was going to be either him or Cohen.  While he is still touring and his latest album of new songs (Tempest) was issued only in 2012  ― the 5th set of new songs since 1997 ― the citation for the Nobel stressed his work from the 60s and 70s.

Plenty critics were unimpressed that he was given that award, hardly surprisingly.  Maybe we should give the last word to Leonard Cohen on this.  Giving Bob Dylan the Nobel Prize, he said, was like pinning a medal on Mount Everest for being the highest mountain.

The early 1970s was an incredible time for Van Morrison; not a period of transition but one of great fulfilment.

Following his breakthrough with Moondance (1970) – Astral Weeks was a whole other thing – he produced a series of albums that together amount to the highpoint of his creative life: His band and the street choir (also 1970), Tupelo Honey (1971), Saint Dominic’s preview (1972), Hard nose the highway (1973), culminating in the live double album .. It’s too late to stop now .. (released January 1974).

In the summer of 1973 he set off on a three-month long tour of North America and Europe with the Caledonia Soul Orchestra. Warner Brothers recorded eight sets on that tour – at The Troubadour (23 May) in Los Angeles, the Santa Monica Civic (29 June), and The Rainbow in London (23 & 24 July).  The eleven-strong Caledonia Soul Orchestra was perhaps his greatest band; it included a five person string section, sax and trumpet, guitar, bass and drums, all led by Jeff Labes on piano and organ.  Many of these musicians had been with him since Moondance, and stayed with him through the first half of the 70s.

That live recording – long-regarded as one of the greatest live albums ever – has now been revisited. The original has been re-mastered and re-issued as .. It’s too late to stop now .. Vol I; this is accompanied by .. It’s too late to stop now .. Vol II, III, and IV & DVD: previously unreleased selections from the gigs in The Troubadour, the Santa Monica Civic, and The Rainbow respectively.  The Rainbow gig on 24 July was filmed by the BBC for a TV special, but never broadcast.  Part of this concert is issued for the first time on the DVD.

So what have we got?

Each night on that tour he paid due tribute to his R’n’B mentors: Ray Charles (‘I believe to my soul’), Bobby Bland (‘Ain’t nothing you can do’), Sam Cooke (‘Bring it on home to me’), Sonny Boy Williamson (‘Help me’ and ‘Take your hand out of my pocket’) and Muddy Waters (‘I just want to make love to you’).  He included the Them-era classics ‘Gloria’ and ‘Here comes the night’ and his first solo hit ‘Brown eyed girl’.   At the heart of these recordings, however, are selections from his early 70s albums; we get a total of 18 of these songs from his six solo studio albums (including 6 of the 8 tracks on Hard nose the highway recorded that spring but not released until later in 1973).  We get two or even three versions of some songs, such as ‘Caravan’, ‘Into the mystic’ and ‘Cyprus Avenue’.

There are surprising covers as well: ‘Being green’ was written for Kermit the Frog on Sesame Street!, he does a version of ‘Purple heather’ that Francis McPeake – his fellow Belfast man who gave us the best-known rendering of that song – would struggle to recognize; both of them had been recorded for Hard nose the highway. As well as that he does Hank Williams’ ‘Hey good looking’ and a punk cha-cha version of that old chestnut ‘Buona sera’.

Five disks to listen to, one DVD 50 minutes long: is it worth it?

The tour was reaching its end when the Caledonia Soul Orchestra pitched up at The Rainbow in North London on 23 and 24 July 1973. Whether it was because Van and his band had got as tight as could be after a great tour, or they were looking forward to the finish, this is the set (volume IV) with the most verve and excitement.  Morrison has returned to ‘Listen to the Lion’ – first recorded for St. Dominic’s Preview – many times, but he and his band nailed a version here that would be hard to better.  Similarly with the versions on this CD of ‘Domino’, ‘Caravan’, ‘Into the mystic’ and ‘Cyprus Avenue’, ‘I believe to my soul’ . . .

The Santa Monica set is more restrained, somehow feels a little flat in comparison. The Troubadour gig, while still good, is maybe not as essential as the Rainbow CD.  The entire package, though, is a must for anyone with more than a passing interest in Van Morrison.

Everything his fans have loved for four decades can be found here: the unique way Van blends gutbucket blues and breath-taking soul with his romantic mystical longings, his unmistakeable voice, all backed by a fantastic collection of musicians, every one of them fully bought into Van’s way of making music.

Astral Weeks was acknowledged as one of the best reissues of 2015 in many end-of-year lists.  This reissue is, nevertheless, a peculiar thing.  The sound is definitely better – warmer, richer – than the first time it was issued on CD, and one can appreciate  Richard Davis’s bass-playing even more.  Plus, there are four additional tracks.

But it could have been so much more, with little effort and just a bit of imagination from the record company.

Unlike the Moondance ‘expanded edition’ of 2013, which gave us a second CD of earlier takes and alternative versions and thus adding to our enjoyment of the record, there is nothing like that here.  In fact the strongest reaction is that of an opportunity missed.

When Morrison played the entire set of Astral Weeks live in November 2008 (40 years after its original release) he made it clear that he had wanted the order of the songs to be different to how they were on the original.  He had wanted the album to reflect the thematic and emotional development of the songs, culminating in ‘Madame Joy’.

Lewis Merenstein was the man chosen by Warner Brothers to produce the album.  Merenstein brought his own vision to it, and saw that the songs needed jazz musicians rather than R’n’B sessionmen.  There is no reason to believe that Merenstein wanted to sabotage Morrison’s vision; it was just that the time limits imposed by vinyl meant that he had to change Morrison’s order.  Morrison’s preference would have meant the first side was 19 mins 40 sec but the second 26 mins 25 sec.

There has been some (not much, to be honest) controversy about whether there was extra music in the Warner Brothers vaults from the Astral Weeks sessions of Sept–Oct 1968.  Morrison alluded to there being two songs but, in his usual elliptical way, Merenstein was always clear that there was nothing.

The two previously unheard takes included on the reissue – ‘Beside You’ and ‘Madame George’ – do not add much.  The rough versions of these two, recorded when Morrison was under contract to Bert Berns, are more interesting, as we can hear how much the songs developed over 12 months.  These versions were included in a ragbag compilation called This is where I came in, released in 1977 by Bang, which collected the eight tracks issued on Blowin’ your mind with the less awful tracks Morrison had to cut to satisfy his contract obligations with Berns.

The long version of ‘Ballerina’ is welcome, but the ‘full’ version of ‘Slim Slow Slider’ is a bit of a mystery.  Apparently those who played on the session remembered that the song developed into a long jazz improvisation, but we only get a hint of that here.

When this classic song was first recorded it was known as ‘Madame Joy’, and it was under this title that Morrison played it at the Hollywood Bowl in November 2008.  Maybe you’d need to be an expert on the East Belfast accent to be absolutely sure, but to these ears it sounds like he’s singing ‘Joy’ more often than ‘George’.

Simple:  A two-disc reissue, with the ‘original’ Merenstein album as Disc 1, and with Disc 2 using Morrison’s preferred order, the original title ‘Madame Joy’, and the (slightly) longer takes of ‘Ballerina’ and ‘Slim Slow Slider’.

Then let the public decide which is better.